Festivals that celebrate tradition and display history are common to peoples and cultures all over the world. In Nigeria, the many and varied festivals are usually colorful avenues through which the
cultural heritage of the people is showcased and celebrated. Artistic presentations, singing and dancing and so on characterize these festivals and each of the diverse cultures in Nigeria has one or the other that has refused to lose relevance, in spite of the influences of modernization and Western religions.
ARGUNGU FISHING FESTIVAL
The popular Argungu Fishing Festival is one of the most famous and exciting traditional festivals in Nigeria. The four-day annual festival dates back to 1934 and has continued with more alluring dynamics every year. The festival is an all-men affair; women can only be there as spectators.
But what is the festival all about? It is a competition among the fishermen of the area to determine who catches the biggest fish and become the winner of the grand prize of a new bus and N1million. The festival takes place at the Matan Fada River in Argungu, Kebbi State.
The sound of a gunshot signals the commencement of the competition, with the anxious and excited competitors jumping into the river to begin the search for the ‘big’ catch. This lasts for an hour, at the end of which each competitor presents his catch for weighing, to determine which fish is the biggest.
The Argungu Fishing Festival attracts spectators from near and far.

SHARO/SHADI FESTIVAL
The Sharo (also called Shadi) Festival is celebrated among the Jafun Fulani. Referred to as the Flogging Competition, it is a traditional rite for young men. The participants are escorted by girls to the event venue and led into a ring formed by spectators, their chests exposed. They are not allowed to wear shirts or cover the upper part of their bodies. The drumming, singing and cheers of the crowd combine to create an atmosphere of excitement.
Each participant is flogged by another and they are expected to endure the pain for as long as the exercise lasts, to demonstrate and prove their manhood. However, not all the young men are able to endure the excruciating pain; which at times leaves permanent scars on their bodies. Those who do endure to the end are certified mature and free to choose a girl to marry. NEW YAM FESTIVAL
The New Yam Festival is a popular annual cultural festival in Igbo land, Southeast Nigeria. The festival is held at the end of every farming season, usually in August, to mark the beginning of harvest. Symbolically, the festival, known as Iri ji ohu, Iwa ji or Ike ji in the Igbo language presents the people with the opportunity to make sacrifices and thank their gods for granting them a bountiful harvest. Iri ji or Iwa ii literally means “eating new yam”.
The festival also celebrates the abundance of food that replaces the scarcity usually experienced between planting season and harvest time. This festival is, therefore, a popular celebration among the Igbos, who are predominantly farmers and eat yam a lot. It attracts prominent Igbo sons and daughters from all over the world, as well as guests who grace the occasion.
On the eve of the festival, all old yams from the previous year’s harvest are either discarded or eaten to give way for new ones. Then, on the day of the festival, only yam dishes are served in the homes. Some renowned farmers use the occasion to invite friends and relations, especially the less privileged, to celebrate with them.
Making presentations of special offerings, the traditional ruler or the oldest man in each community is required to offer yam (cooked or roasted), usually mixed with palm oil, to the recognised deities of the land and to the ancestors. After the sacrifice with its rituals, members of the community are free to start eating their already prepared dishes of yam. OFALA FESTIVAL
The traditional institution of the Igbo people is made more prominent by the celebration of Ofala Festival by various traditional rulers. The word, “ofala” is derived from two Igbo words – ofo, which means “authority” and ala, which means “the land”. The summation of these words forms the word, ofala, which means “the authority of the land”.
Originally, Ofala was celebrated for a king twice – a day after his coronation and after his death. The Ofala celebrated upon the death of a king was known as “the last Ofala”. However, with the gradual influence of modernity and the festival now being tied to other salient social and political issues affecting the lives of the people, it is now celebrated by traditional rulers as an annual event.
In Igbo land, the Ofala Festival of the Obi of Onitsha, Dr Alfred Nnaemeka Achebe, is the most prominent. Ofala is almost a red cap affair, as traditional rulers adorned in royal regalia and red caps and holding the traditional staffs and customised royal hand fans made of animal skin usually take over the event to celebrate with one of their own. 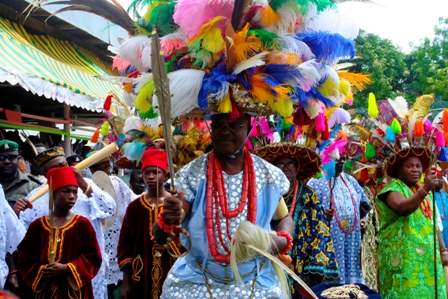 ONITSHA IVORY FESTIVAL
Among the Igbos, the Onitsha Ivory Festival is one of the most famous. Ivory – the substance elephant tusks are made of – is regarded as a very expensive item for the traditional institution in Igbo land. It is, therefore, usually worn by a select category of women who can afford it. They are usually the wives of wealthy and powerful men in society.
Today, an Onitsha woman who has acquired enough ivory and coral (substance from the skeletons of some animals) to kit herself out in the ivory costume can claim the title “ivory holder”. To qualify as an ivory holder, a woman is expected to have two large pieces of ivory, one to be worn on each leg. Each piece of ivory usually weighs about 56 pounds or 25 kilos. Also, the woman has to wear two other pieces of ivory on her wrists. In addition to these are coral and gold necklaces, with which she adorns her herself. CALABAR FESTIVAL AND CALABAR CARNIVAL
Since Cross River State held the first edition of the Calabar Carnival in 2004, it has become one of the most famous festivities in the country. The carnival is one of the efforts aimed at making Cross River State an all-important tourist centre. It kicks off at the end of the annual Calabar Festival, which takes place in December every year. The Calabar Festival is a celebration of the diverse culture of the people of the state.
The Calabar Carnival is a very spectacular event, with dancers in colourful costumes and long, feathered headdresses dancing along the major streets in the state capital, as sonorous music fills the air. The street parades showcase up to 50, 000 young people, twisting their supple bodies into admirable spectacles.  The occasion attracts no less than two million people from different parts of the country and beyond to Calabar every year. EYO FESTIVAL
The Eyo Festival, otherwise known as the Adamu Orisha Play, is a Yoruba festival unique to Lagos. Traditionally performed on Lagos Island, the festival is presently showcased by the people of Lagos as a major tourist event.
The word ‘eyo’ refers to the costumed dancers, known as masquerades, that perform during the festival. The origin of its observance is found in the clandestine activities of secret societies. It is believed that the play is one of the manifestations of the customary African revelry that serves as the forerunner of the modern carnival in Brazil. On the Eyo day, the main highway in the heart of the city (from the end of Carter Bridge to Tinubu Square) is closed to traffic, allowing for a procession from Idumota to the Igaldungaran palace. The first of such processions was held on the 20th of February 1854, to commemorate the life of Oba Akintoye.
The participants pay homage to the reigning Oba of Lagos. The white-clad Eyo masquerades represent the spirits of the dead and are referred to in Yoruba as agogoro eyo (literally: “tall eyo”).The festival takes place whenever occasion and tradition demand, though it is usually held as part of the final burial rites of a highly regarded chief in the king’s court. OSUN/OSOGBO FESTIVAL
Among the cultural festivals highly regarded in Nigeria and the South West region in particular is the Osun/Osogbo Festival, which usually takes place in July and August of each year. The festival takes place in the Sacred Forest of Osun and lasts for a week. It is used as an occasion to reverence and honour the river goddess, Oshun of Osun State.
The people of Osun believe firmly in this goddess and therefore, thousands converge to attend the event annually. Some people come in from other parts of Africa and beyond, as it attracts Osun people in  the Diaspora. The devotees believe in the potency of the goddess to hear their requests and provide solutions to their problems.

OJUDE OBA FESTIVAL
Ijebu Ode, a city in Ijebu Ode local government area of Ogun State is the host of the Ojude Oba Festival. Ojude oba literally means “the king’s front yard”. During the event, citizens and well-wishers pay homage to the king, the Awujale of Ijebuland. The event takes place on the third day of the Ileya Festival, (Eid-el-Kabir), when Muslims and non-Ijebu citizens return en masse.
The festival has made Ogun State a major tourist destination in Nigeria. The thematic structure of the festival gives rein to the solicitation and agitation of topical issues in the state and the community. The festival’s repertoire includes a parade from the Balogun clan and Dodondawas clan, regberegbe (age groups), several societies and groups, accompanied by rapid gunshots, traditional songs, poems and equestrian skill display witnessed by the locals, national and international visitors, as well as Ijebu indigenes in the Diaspora. SANGO FESTIVAL
The Sango Festival is held in honour of Sango, Omoekun (“son of a tiger”), from whom the present day Alaafin of Oyo Oba derives the title.
Sango was the second son of Oranyan, the first alaafin and the seventh grandchild of Oduduwa in Ile Ife. Upon the death of Oduduwa, the grandchildren dispersed from Ile Ife, forming different Yoruba kingdoms in the western part of Nigeria.
According to oral history, Sango was said to be so powerful that he amassed a formidable empire in Africa and transported Oyo culture beyond the Oyo Empire. He was a strong warrior, regarded during his time as a symbol of power and truth. He was the supreme judge in Oyo Empire and the final court. I spend a lot of time writing and sourcing for them so please consider commenting, liking, giving it a share or you can subscribe to get updates sent to your inbox. It's totally free and always will be.
Posted by Adelola Rotimi +2348064727296 at 03:44